Wild rhubarb (chukri or rawash) is surely one of the delights of the Afghan spring. Like many forage plants, rhubarb is both a delicacy in the cities, and an important food for those living in rural areas. As the winter snow melts, the rhubarb rhizome produces stems which can be plucked and eaten raw while walking in the mountains, bought from sellers on the roadside in places like Ghorband, Mahipar and Salang or from carts in Kabul and other cities. Rhubarb is one of the forage plants of Afghanistan instantly recognisable to north Europeans who grow it as a garden vegetable. But there are many other plants, some less familiar, which are equally important in rural areas. AAN’s senior analyst, Kate Clark, has been assessing the forage plants of the Koh-e Baba and has come up with a top ten of the most important. It is a mixed list of edible, medicinal, fuel and fodder plants. 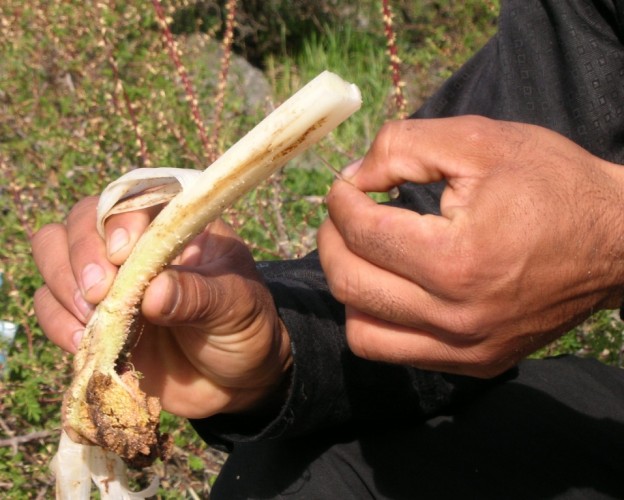 Out walking in the Koh-e Baba, the mountains which run through the heart of Hazarajat, I met local villagers collecting rhubarb(chukri) and mullein (shirish),which is cooked as a vegetable. In a region where irrigated (abi)and rainfed (lalmi) cultivatable land is very limited and the high altitude means only one crop a year can be grown, the vast rangelands – comprising anywhere above the cultivatable lands – are of vital importance. Rules on access to both water (mainly melt-water) for irrigating crops, and rangeland for pasture and harvesting wild plants are complex.

The rangeland has seen degradation. Even so, the UN Environment Programme argues in a paper due to be published next month on the Shah Foladi area, just to the south of Bamian town, that, ‘the relatively intact and conservation-worthy condition of the area today is a testament to [local people’s] natural resource management traditions.’ (1) The report will be part of the official proposal package for the stunning mountains of the Koh-e Baba to become a national conservation area/mountain park.

The following list of top ten foraging plants has been drawn up after seeking advice from both locals and a team of botanists from Kabul University and the Royal Botanic Garden in Edinburgh, Scotland, who were in the mountains teaching practical fieldwork skills to a group of botany and agriculture students from Kabul and Bamyian universities (see an earlier blog here). The names of the plants are given in Dari, English and Latin. Cooking tips are also included, where appropriate.

1 Talkhak/rawana (deleted: ghuzba), wormwood, Artemisia leucotricha. This family of shrubs, which are scented with aromatic oils, grow in dry places. In Hazarajat, (amended: the plants of two species of Artemisia are gathered – talkhak for fodder and rawana for fuel.) Given the paucity of trees,rawana (deleted: ghuzba) is an important fuel plant. Later on in the year, it is common to see children and adults out on the mountains, gathering and carrying home what look to be impossibly large loads of the dry and twiggy shrub whose woody roots are particularly good for slow burning. Ghuzba is stored for winter fuel and for baking – when it gives a pleasant flavour to bread. The ghuzba root is also used for making brooms.

2 Chukri or rawash, wild rhubarb, Rheum ribes. Each spring, the perennial rhubarb rhizomes push up stalks which have, to English eyes, unusually wrinkled, warty leaves. Rhubarb stalks are peeled and usually eaten raw with salt, or in salads. Chukri is delicious, a member of an old Kabuli family told me, cooked with samaruk – wild mushrooms – or with spinach (see a recipe from Helen Saberi’s Afghan Food & Cookery: Noshe Djan at the end of this blog.) I also ate it recently with duck and it was a deliciously sharp and aromatic foil to the rich meat. Rhubarb eaten as a savoury food is a revelation to the English palate, although of course, cooked European-style, sweetened in crumbles and pies or made into jam with ginger, it is also delicious.

Rhubarb has a long and noble history in Afghanistan (see this account from 1549, of King Humayun having to take his wives, sisters and aunts to see the flowering rhubarb when he would rather have gone to fight the Uzbeks in Balkh.

Rhubarb contains vitamins C, K and calcium, manganese and potassium. In drought years, rhubarb and other plants became even more important for the local population, as I witnessed in Hazarajat in 2000. That year, I also encountered Hazara men crumbling up the (surely poisonous?) dried leaves to eke out their naswar (chewing tobacco).

3 Shirin Boya, Liqourice, Glycerrhia glabra is from the pea/legume family and has pale purple flowers. The root is dug up and can be boiled to make a tea which is used to treat stomach ache. The dried roots can be sold on to the Pakistan, Indian and Emirates markets.

4 Gheghu,(2) umbuliferae ferulus. This fodder plant is a genus of plants from the aromatic umbuliferae family (which also includes carrots, turnip, parsley and hemlock – the name refers to their umbrella-like flower arrays). The ferula genus includes fennel/jawani badian, asafoetida (number 7 on this list) and galbanum. Gheghu is a perennial. Growing with leafy stems and masses of yellow-coloured flowers, it is gathered to feed livestock in the winter.

5 Baldarghu, giant hogweed, Heracleum mantegazzianum. Also from theumbulifera/carrot family, this plant can grow to well over one metre and has masses of white flowers. Peel the stems and eat them raw, or steam and eat. In Hazarajat, people also pour boiling water on the seeds and drink the liquid to reduce high blood pressure. Handle the plant with care: touching the leaves when it is sunny can result in blisters and getting any of the plant’s sap in the eyes is dangerous.

6 Shirish, mullein, Verbascum. Shirish is a tall, hairy biennial which grows out of a basal rosette and a spike of yellow flowers. When just out of the ground, it is a delicious, smooth-leaved vegetable – and is currently being gathered. Shirish also has many medical uses – as a remedy for skin, throat and breathing ailments.

7) Chars, Canabis, Canabis sativa. The leaves, I was told, are good for digestion…

8) (H)ing, asafoetida, Ferula asafoetida  This is another carrot/umbuliferaefamily favourite. A resin, made from the rhizome of the plant, has a sour, unpleasant, pungent smell when raw, but tastes fine when cooked. It is a very effective digestant and anti-flatulent and may also have anti-viral properties. Asafoetida is widely used in cooking in the Indian sub-continent and, in the past, it was a very important export. In Afghanistan, it is mainly used for medical purposes. The resin, called hing or ing in Dari, is known for its disgusting smell and usefulness for killing off intestinal worms. Asafoetida extract used in irrigation water in the Hazarajat also protects the potato crop from worms and insect pests.

9) Zira-ye Kohi, Caraway, Carum carvi This is another delight of the carrot/umbuliferae family, a delicious spice, used in Afghanistan for flavouring rice and in other dishes.

(1) This is a special report by  the Protected Areas Unit of the United Nations Environment Programme, Natural Resource Management Traditions in Shah Foladi: a Case Study of Jawkar and Siyalayak Communities, (to be published in July 2012). Shah Foladi, just to the south of Bamian, is the highest peak in the Koh-e Baba (5143m). The report starts with this introduction:

For communities living in the Shah Foladi region, there is a long history of managing the resources they intimately depend upon. The vast pastures and small areas of irrigated and rain fed agriculture are the basis of communities’ dominantly agro pastoral livelihoods. In this region, there are established norms, rules, and decision making mechanisms that deal explicitly with natural resources. The relatively intact and conservation-worthy condition of the area today is a testament to these natural resource management traditions.

In today’s context of a growing human population, a drying climate, and years of national conflict and upheaval, the existing natural resource management traditions are being called on to grapple with growing challenges. Climate change combined with intensive land use and questions of land tenure are leading to increasing degradation of soil, water, biodiversity, and ecosystem services. This land degradation threatens the livelihoods and very existence of the regions’ communities who depend on these resources. In addition, land degradation means diminished biodiversity and ecosystem services with regional and global significance.

The UN Environment Program aims to address land degradation in part through supporting regional livelihoods and conservation initiatives. To achieve these aims it is important to first understand existing the conditions, threats, and natural resource management traditions…

(2) There is no single English common name as this is a genus, rather than a single species. However, in my grandfather’s area of England, Westmoreland, people also do not differentiate between the various whiteumbeliferae of the hedgerow; the dialect word for all of them is keck.

(3) AAN’s Thomas Ruttig adds wild asparagus to the list, which he says, one of his then UN Japanese colleagues, brought back an armful of, in 2000 or 2001, having gathered it in Paghman. Ruttig said the asparagus made a ‘delicious and wholly unexpected dinner.’ However, he has never been able to persuade Afghans that the plant is edible, so wild asparagus, it seems, may yet have to be introduced as a foraging crop…

Recipe for Sabzi Rawash, Spinach with Rhubarb and Dill

450g/1 lb gandana, cleaned and chopped (if you’re in Europe, you could use leeks, instead)

Wash the spinach thoroughly, remove the stems and chop roughly. Wash the leeks well and chop into small pieces. Heat 50 ml/2 tablespoons of vegetable oil in a pan and fry the gandana (or leeks) over a medium to high heat. When they are soft, but not brown, add the spinach and stir continuously until the spinach reduces. Reduce the heat, cover, and continue to cook gently, stirring occasionally, until the oil comes to the surface. Then add the dill, salt and pepper. Add a little water if necessary.

While the spinach is cooking, skin and wash the rhubarb and cut it into 2.5 cm/1 inch lengths. Fry it briefly in the remaining 25 ml /2 tablespoons of oil over a medium heat, without letting it brown, then add it to the spinach and cook for a further half an hour or until it is sufficiently cooked.