One Day in a Year: Afghan views on International Women’s Day

Home » Reports » Context and Culture » One Day in a Year: Afghan views on International Women’s Day

“The celebration of 8 March is a new concept, but Afghan women’s role in society has been respected for thousands of years,” President Ghani said in his speech for International Women’s Day on 5 March 2015, three days before the date. But if that is true, women’s rights activists asked after the event, why is Afghanistan still one of the most dangerous places in the world for women to live in? Women’s lives are still dominated by factors such as little opportunity to take part in political and social decision making, poor healthcare, education cut short early and domestic violence, says AAN’s Naheed Esar. Is International Women’s Day contributing anything to changing these circumstances? She comes to the conclusion that it needs fewer speeches and more action. 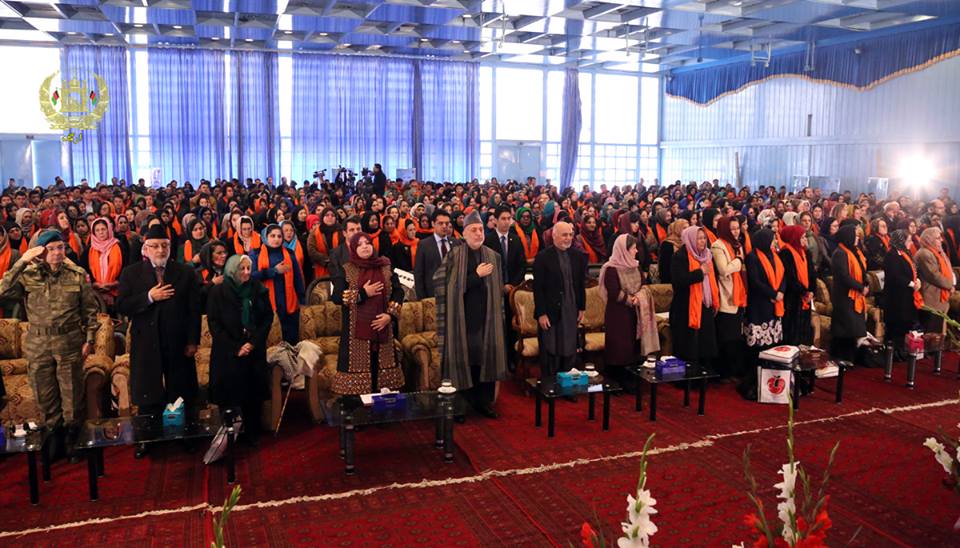 Women's Day - occupied by formalistic government celebrations and international community events, says out author Naheed Esar. The photo - taken from the Facebook account of the presidential palace, shows the event on 5 March at the Amani High School.

Every year, International Women’s Day inevitably starts with men wishing me and my sisters, my mother and my fellow female colleagues a Happy Women’s Day. We get flowers, scarves or other gifts, and there is always lots of good food. Sometimes, we are invited for conferences in our honour, where we have to stand on a stage to be pointed at while someone, usually a man, praises the importance of our existence for the country and society. Sometimes, we are asked to talk about what we wish for ourselves, and the men have to listen. We see them nod politely. The next day, or even by the afternoon of Women’s Day itself, we are back to usual.

What ‘usual’ means: Afghanistan is still one of the worst countries in the world to be a woman. We still see few women in positions of power. We see women remaining illiterate in far higher numbers than men and getting worse health care when they live in rural areas. Just recently, former AAN colleague Wazhma Samandary reported on an increase in the registered cases of violence against women in 2014 compared to previous years, some of them involving extreme brutality.

Interviewing men and women about their stance on Women’s Day, I was surprised by either the lack of support for the idea of having a day for women or the complete rejection of it. Most men I talked to go along with it rather listlessly, taking it for one of the many holidays that allow some respite from work, with its official sessions, festive lunches and conferences. More men than I had thought were against it. Women’s Day seemed to antagonise them. This may partly be because they do not really want women to be empowered, although it beats me why they would be threatened by a day that is more of an empty shell than filled with real meaning or power to change things. Some told me it is because it “is a Western concept,” introduced by “the UN”, “the Americans” or the “international community” after 2001. Even some women joined in this argument, although for different reasons. Shahla Farid, for example, a women’s rights activist and law professor at Kabul University is worried that the conception of this day as ‘Western’ gives even more ammunition to the conservative community that despises ‘urban, modern women’ and female activists and what they stand for.

However, International Women’s Day is no invention of the post-2001 period. It  was actually started by the Socialist Party in the United States in 1909, when it was observed for the first time in that year in New York. However, it was thanks to a German feminist, Clara Zetkin, who a year later, in 1910, suggested an initiative to make it a holiday, at the second meeting of the Socialist International (an international association of social democratic parties) held in Copenhagen. On Zetkin’s initiative, the participants decided to give a platform to the movement for women’s rights and “to build support for achieving universal suffrage for women.” In other words, getting women the vote was a prime driver towards having a day to focus on women’s rights.

The first official celebration of the 8th March as International Women’s Day was in Germany, Austria and Switzerland in 1911. During the World War I, the day also became an important symbol for pacifist protestors. The UN General Assembly, of which Afghanistan is a member, only declared 8 March the International Day for Women Rights and World Peace in 1977.  In Afghanistan, Women’s Day has been marked since the second half of the 1960s, after the women were enfranchised by the 1964 Constitution, promulgated under Zahir Shah, well before the 2001 intervention or, indeed, the Soviet occupation of 1979. Afghan-American scholar, Hafizullah Emadi, for example, wrote about how it was marked in the late 1960s  in his book “Repression, Resistance and Women in Afghanistan” (published in 2002 by Praeger):

One of the major political works of the leftists [but not only the pro-Moscow ones] was the celebration of Women’s Day on 8 March every year, which coincided with the International Women’s Solidarity Day (IWSD). Both the WDOA [Women’s Democratic Organisation of Afghanistan; the PDPA’s women’s organisation] and the PYO [Progressive Youth Organisation of the Maoists] sponsored rallies and meetings on that day and marched though the streets in downtown Kabul with placards and red banners inscribed with political slogans of women’s liberation and women’s solidarity with the women’s movement internationally.

The day was made official under the PDPA regime (1978-92), but it also became formalistic, as in other ‘socialist’ countries and no longer a day when (some) women demanded their rights from state and society. (1)

Even the Taleban celebrated Women’s Day. AAN’s Kate Clark remembers that in 2000, they organised unprecedented gatherings of women in Kabul and Mazar. In the capital, 700 women met at the Rabia Balkhi hospital where a speech from Mullah Omar was read out. He referred to the violence women had had to live through during mujahedin rule and said they could now live in peace and have their rights respected, thanks to the establishment of the Emirate. One woman told Kate Clark: “All the women present are so happy, I cannot describe it.  … the government is considering this issue [of women’s rights].  We will observe Islamic hijab, but we want our rights to be observed.  I think it’s a sign of improving conditions.”

Clark remembered the joy with which women (many of whom had been, and would be again, leaders in the fields of health, media and education) met colleagues and friends in a way otherwise unimaginable during Taleban rule; this was a time when most women were banned from working and all were  banned from having any role in public life. She remembers the care with which everyone spoke, scrupulous to avoid being seen to criticise their rulers and to couch hopes for change and real unhappiness with the regime within bland praise of the Emirate.

Since 2002, international donors in Afghanistan have championed many events and from 2003, the government started to organise its own events, too. It seems to me that, in the process, Afghan women have somehow lost the ownership of this day. It is not ‘our’ day anymore. It is occupied by formalistic government celebrations and internationally-funded events. Today, women across the country sit in shuras or conferences and are being told they share equal rights with men, as stipulated in the Afghan Constitution, but saying so does not make it so. I, and many other activists I spoke to, think the format of the day needs to be updated… reclaimed by us.

The ideas are very varied. Some women think the day should be ‘Afghanised’ by, for example, celebrating the birthday of a Muslim religious woman – this might bring more Afghans behind the day and remove, what some people called ‘the provocation of the religious conservatives.’ Iranians and the Shia community in Afghanistans, for example, they say, celebrate the birth of Bibi Fatima, the daughter of the Prophet, as a ‘women’s and mothers’ day.’ (The date of her birthday in the Islamic month of Jamad al-Thani is fixed by the lunar calendar, so, like Ramadan, it moves around the solar year: in 2015, it will fall on 10 June). Other women say why would we want to consider whether conservatives are provoked or not, bearing in mind that they are driving much of the suppression of women?

Others say, let’s act for women on this day, not only talk about them. Let’s organise roundtables with government about issues such as the EVAW law or domestic violence. Or, instead of spending money on Women’s Day celebrations, let’s start a fundraiser and lobby for a gender studies department at Kabul University or any other more sustainable form of education on women’s issues or support for women. University professor Shahla Farid remembers one Women’s Day she attended in India with a meeting of female lawyers who decided to, on this very day, work for the freedom of female prisoners who could not afford a lawyer. I’d like to see that sort of action in Afghanistan.

(1) AAN’s Thomas Ruttig, who was in Afghanistan in 1982/83 and in the late 1980s, remembers that there were some women in the PDPA’s women organisation leadership who were both feminist and communist and who pushed for women’s rights, which was not always in consensus with the (also male-dominented) party leadership. Under Najibullah, in 1987, the PDPA women’s organisation was separated from the party, renamed Afghan Women’s Council and leadership taken up by Massuma Esmati Wardak, who has been an activist of the mid-1960s democratic movement, in a non-communist group called Seda-ye Awam, People’s Voice. (Esmati Wardak was appointed member of the 1964 Constitutional Advisory Commission and elected to parliament from Kandahar in 1965.)